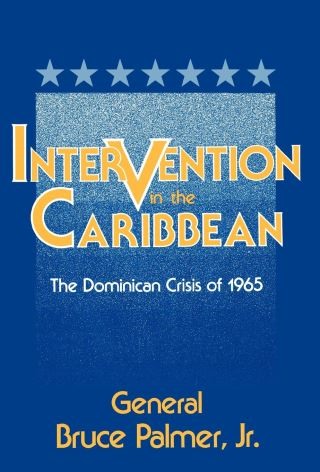 Intervention in the Caribbean

The Dominican Crisis of 1965

The 1965 U.S. intervention in the Dominican Republic remains a unique event: the only time the Organization of American States has intervened with force on a member state's territory. It is also a classic example of a U.S. military operation that drew in America's hemispheric allies. Finally, its outcome was that rare feat in the annals of diplomacy—a peaceful political settlement of a civil war.

Here for the first time is the full story of that action, as told by one of its leading participants. General Palmer was the U.S. Army's operations chief in Washington in April 1965 when the Dominican crisis broke, and was placed in command of U.S. forces deployed to the Republic. His perspective thus reflects both the perceptions of Washington officials and those of the U.S. commander on the scene.

Palmer's instructions from President Johnson were to prevent another Cuba. Although the intervention remains controversial today, especially with Latin Americans, it was successful both politically and militarily, bringing unprecedented stability to the long-troubled Dominican Republic. The lesson Palmer draws is that success in such a venture comes only when political and military actions are orchestrated toward a common political goal.

Palmer concludes with an assessment of the current situation in the broader Caribbean area, including a comparison of the 1965 Dominican and 1983 Grenadian interventions, and an analysis of the situation in Panama with its implications for the Canal Treaty. His book is a timely contribution to the history of the Caribbean that enlarges our understanding of this region's vital importance to the United States.

General Bruce PalmerJr.: General Bruce Palmer Jr. (1913–2000) was a noted four-star general who played an important role in Vietnam and was for a time Acting Chief of Staff for the Army. His book, The 25-Year War, is a widely acclaimed analysis of the Vietnam conflict.