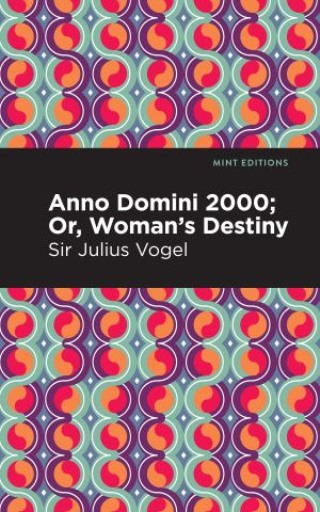 Anno Domini 2000; Or, Woman's Destiny (1889) is a novel by Sir Julius Vogel. Written by the former prime minister of New Zealand, the novel sold poorly upon publication. In recent years, however, the novel has been recognized as a groundbreaking work of science fiction that uncannily predicted many of the social developments that would define New Zealand’s contribution to human civilization in the twentieth century, notably its status as the first nation to grant women the right to vote. “The barriers which man in his own interest set to the occupation of woman having once been broken down, the progress of woman in all pursuits requiring judgment and intellect has been continuous; and the sum of that progress is enormous.” In the year 2000, the British Empire is an Imperial Federation apart from an independent Ireland. Having granted women the right to vote, British society has enjoyed a revolution in gender roles from the top down. Hilda Fitzherbert, the young and charismatic Prime Minister of New Zealand, is a shining example of the new woman of the twenty-first century. When her burgeoning romance with Emperor Albert threatens diplomatic relations with the United States, the peaceful world order faces the threat of war. With a beautifully designed cover and professionally typeset manuscript, this edition of Frank Aubrey’s Anno Domini 2000; Or, Woman's Destiny is a classic of science fiction reimagined for modern readers.

Sir Julius Vogel (1835-1899) was the eighth Premier of New Zealand and a pioneering science fiction writer. Born in London, he was educated in chemistry and metallurgy at the Royal School of Mines—now part of Imperial College London—before emigrating to Victoria, Australia. There, he worked as an editor for newspapers aimed at the goldmining industry and made a failed run for a seat in Victorian Parliament. In 1861, Vogel moved to Otago, New Zealand, where he founded the Otago Daily Times and won an election to the provincial council in 1862. In 1869, having married Mary Clayton two years prior, he retired from provincial government and began serving in the administration of Premier William Fox in various roles. From 1873 to 1875, Vogel served as the first Jewish Premier in New Zealand’s history, using his power to expand the nation’s railway system, roads, and communication infrastructure. In 1889, following his last stint in parliament, he published Anno Domini 2000; Or, Woman's Destiny, the first science fiction novel written by a New Zealander.